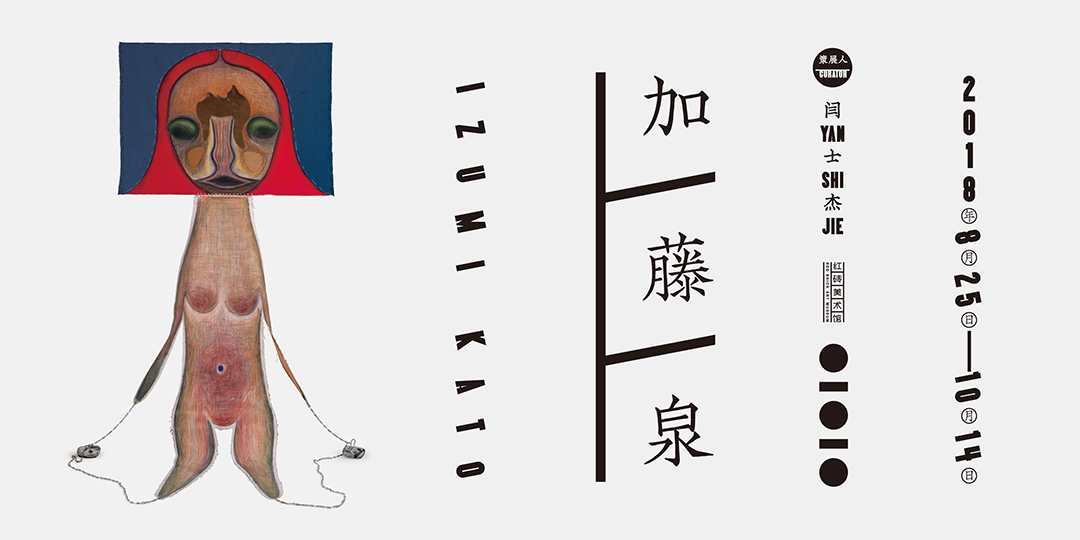 “Izumi Kato”, the first large-scale solo exhibition of Japanese artist Izumi Kato, will be convened at Red Brick Art Museum from August 25 to October 14. With this exhibition, the artist will present more than 50 works in the past decade that include Untitled (2018), a brand new fabric series specially tailored for the exhibition, and on-site creation in the garden of Red Brick Art Museum. The paralleling Archival Exhibition is to invite viewers to get an in-depth understanding of the artist’s status of creation and major nodal points during his engagement with art after relishing in the rich experience on art. The exhibition is curated by Yan Shijie, as the first periodic retrospection in the artist’s career, which also embodies a brand new starting point for the artist’s creation.

Izumi Kato’s works are of distinctive features with a pervasive outline that is sometimes a combination of female and male characters with slim and extended legs and arms in a quirky gesture. They would comingle plant properties which may suggest an origin from the spiritual world with a primitive power rooted in the earth. Standing alone from the boundary of the history of visual art in dualism of the east and west, these pervasive and vivid visual images originate from local culture and carry religious conception of the nature. In the artist’s virtual world, these creatures are both cordial and strange. They would be solemnly presented to the viewers in an array of ways.

By fusing the concept of “tree of life” with the ideological system in Japan and the theory of biological evolution in the west, the artist is to voice the harmonious relationship of all creatures. The exhibition is to present Untitled (2014), his largest work so far. It is engraved with camphorwood which is soft and fragrant. Camphorwood is usually used for Buddha sculptures. This piece of work comprises of several colossal figure sculptures with aggressive postures. They have arms stretching upwards and “human faces”. Their coarse look and solid forms are brimmed with primitiveness.

Izumi Kato was born and brought up in the coastal Shimane in southwestern Japan. It is one of the figureheads of Japanese ancient culture. He grew up surrounded by profuse worship of elves. As a primitive religion in Japan, Shintoism falls to pan-spirit polytheism that holds all animals and plants in nature as divines. The exhibition is to communicate with gods and spirits that gain spread in Shimane. In No. 2 Exhibition Hall opposite to the Round Hall, the soft vinyl sculpture ‘enshrined’ on the substrate is sacred and inviolable. It reminds people of traditional deity-sacrifice ceremonies brimmed with primitive clout in Shimane. The Exhibition Hall is surrounded by the artist’s representative stone sculptures. After combining with the long-standing handiwork lithograph, they introduce the faith towards Shintoism to the 3-D space so that all things including stones and paper would be filled with divinity.

Izumi Kato has been hammering at going after derivative language of art. His paintings, collages, wood sculptures, soft vinyl sculptures, stone sculptures and fabrics are gradually incorporated into his sphere of creation. The introduction of a correlation between materiality and Japanese-style aesthetic also speaks of his delicate handicraft techniques. With latex gloves, the artist would coat the coarse cloth. The seemingly plain images are endowed with vivid spell. Untitled (2018), his latest fabric series, would engage into the dialogue with the architectural space of Red Brick Art Museum. It attempts to tackle with the mutual relationship between ‘techniques’ and ‘objects’ with experimental dialogue. It also reflects the artist’s process of tackling with space and setup. The works is an extension of multiple palette consisting of embroidery and fabrics. Its artificial traces and changes on forms of materials can be captured. The waving fabrics under the outer force, the solid chain and stone construct an evident comparison, which triggers viewers’ illusion on the works’ actual status.

Two pieces of stone sculptures installed in the garden of Red Brick Art Museum have chosen the materials on the spot. They are stones from outskirt Beijing, covered with pigment without going through sculpture or remolding. More attention is paid to the natural aesthetics of the material so as to arouse impetus of creation. Chiming with modern gardening paved by bricks that feature oriental characteristics of Red Brick Art Museum, it is on a lookout for the concept of “Found Object” containing aesthetics from the east. 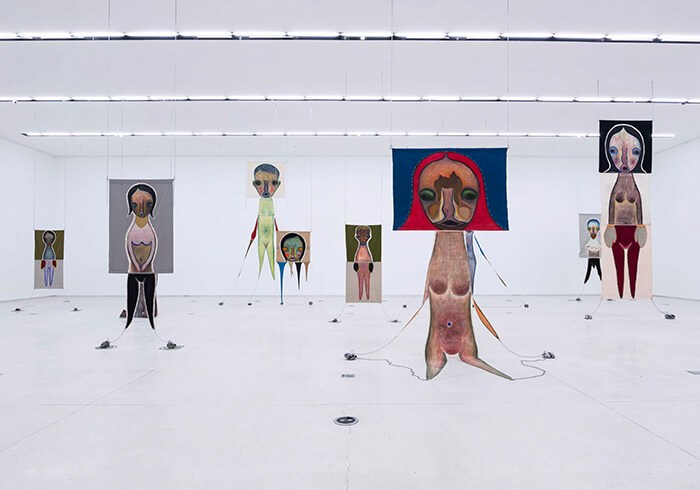 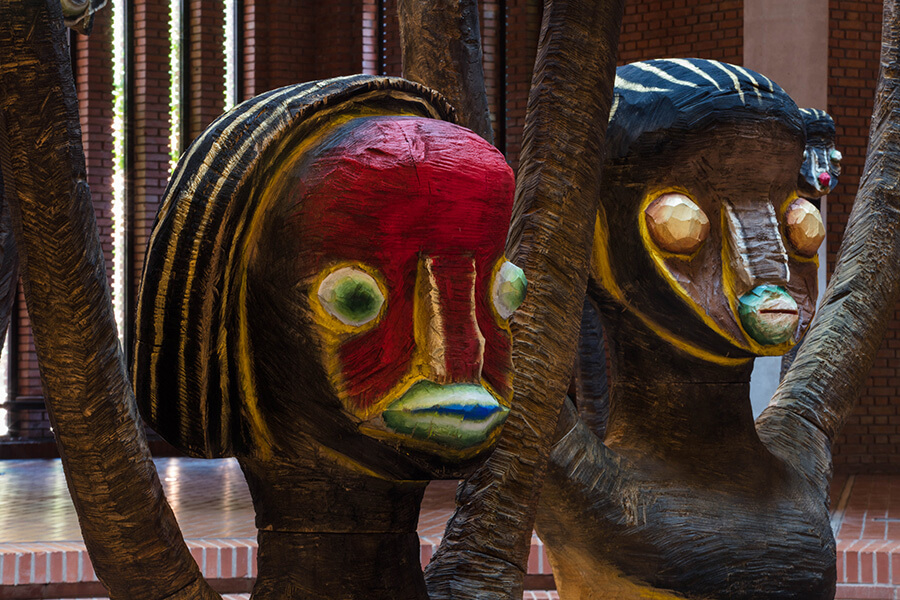 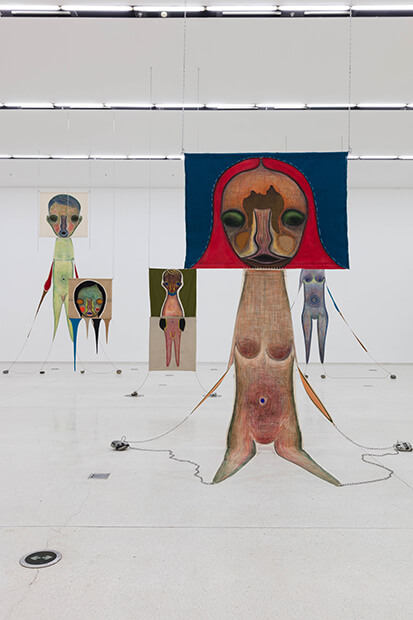 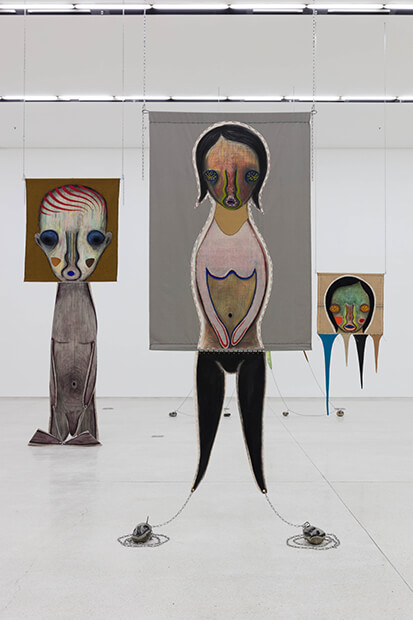 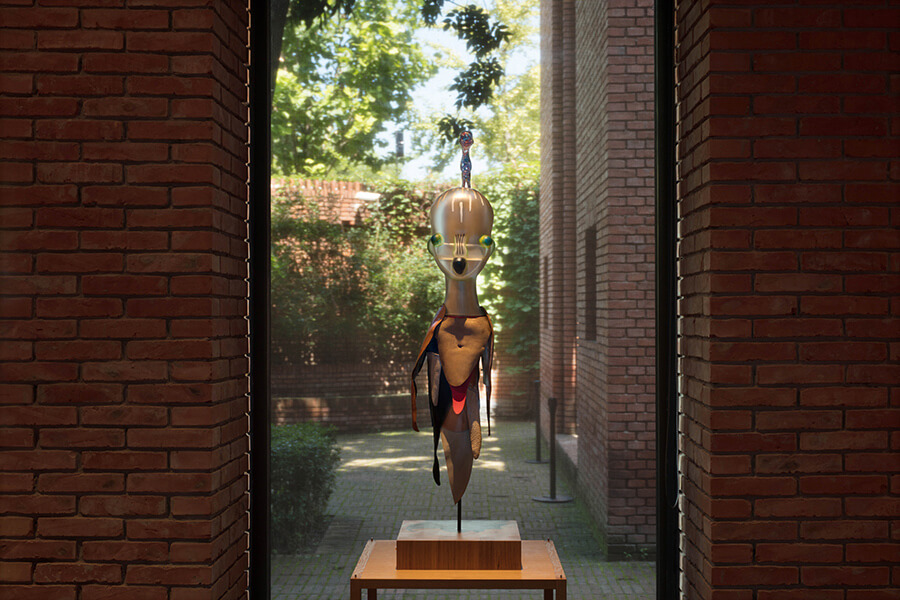 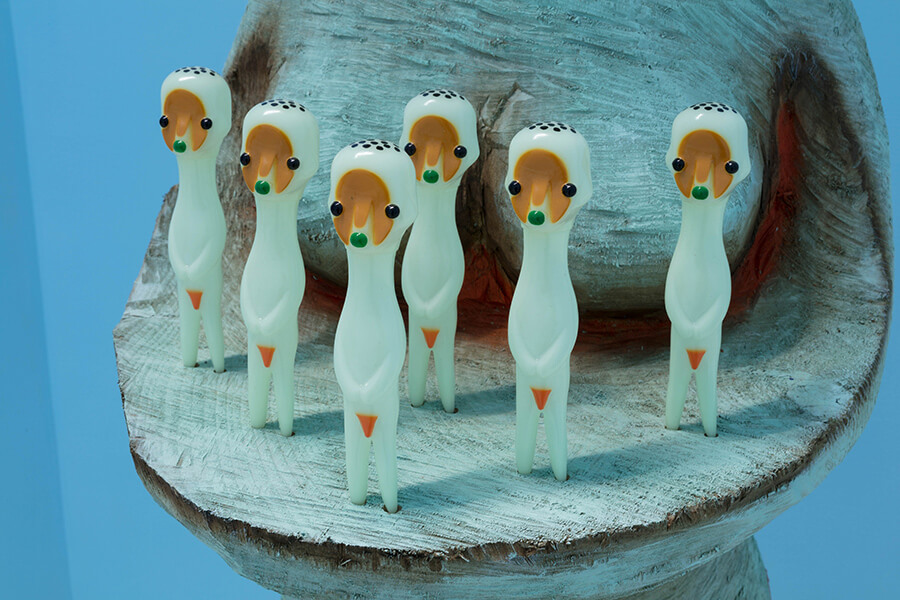 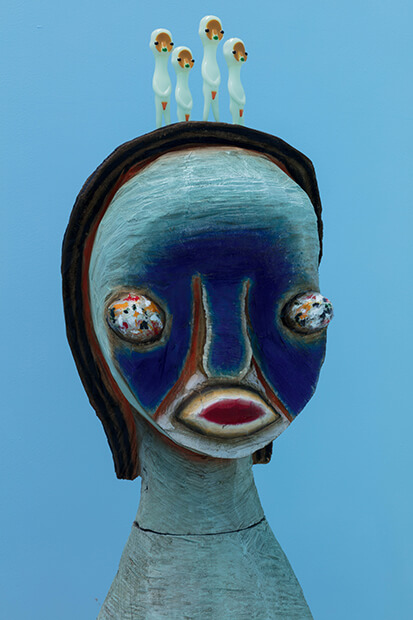 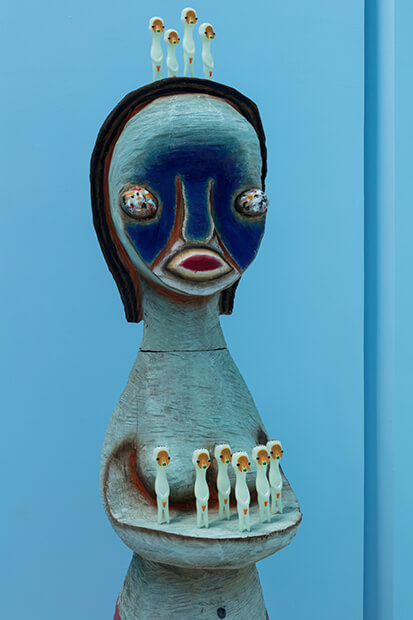 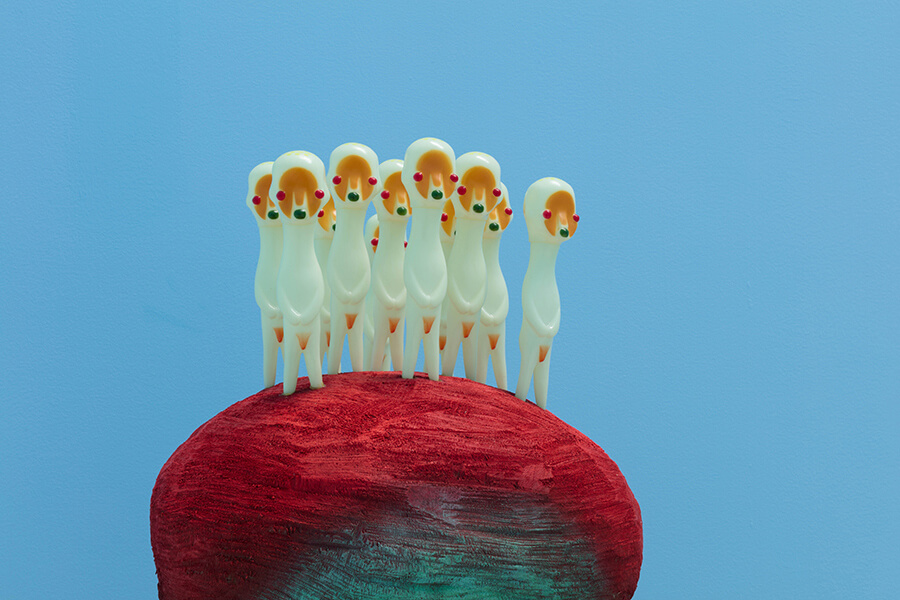 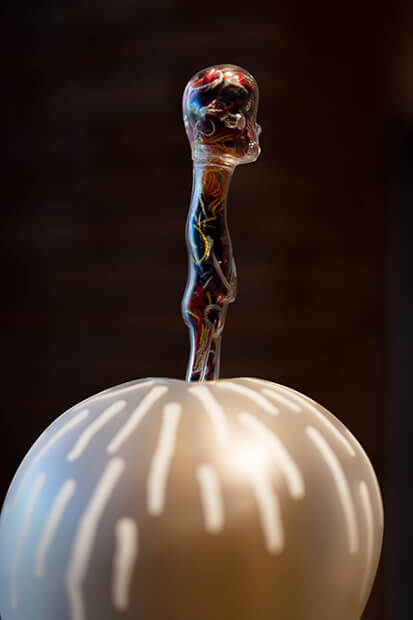 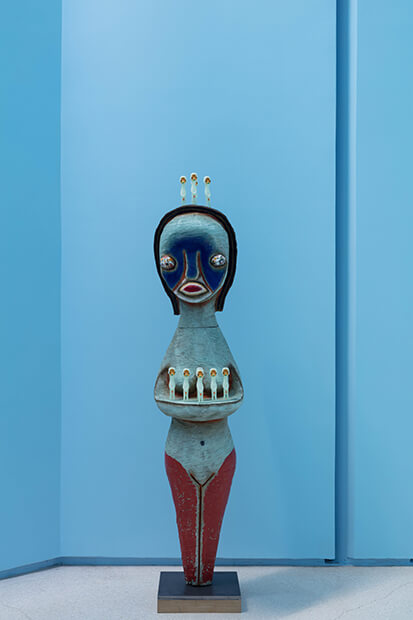 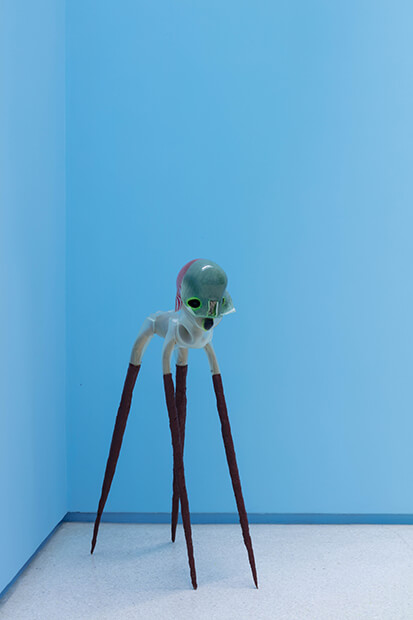 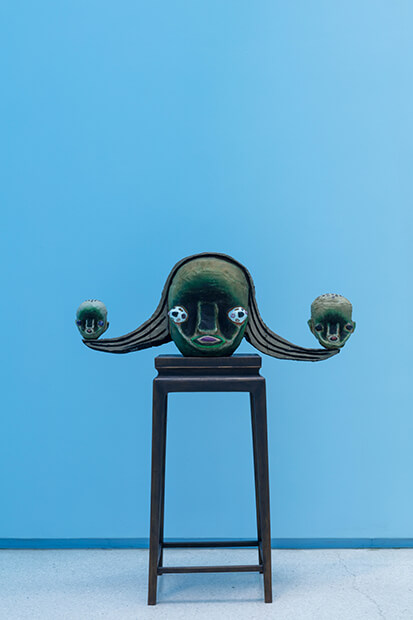 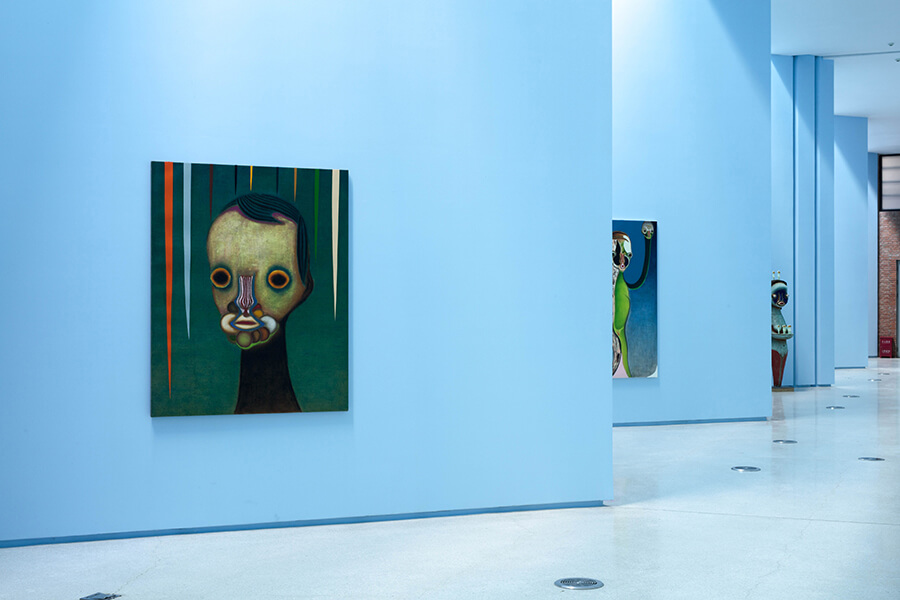